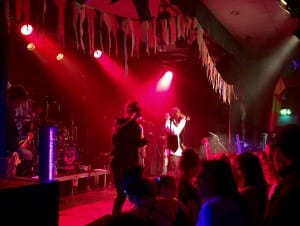 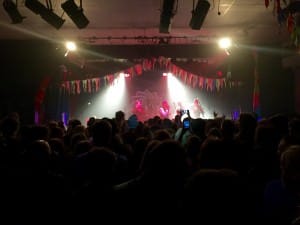 Ahead of their UK tour that officially starts 3rd March in Fairfield Halls, Croydon, I went to see the Dub Pistols perform at the Aquarian Party, Queens Hall, Narberth in Wales.

One word ENERGY!!!! These guys are not new to the circuit and it shows, not only do they work well together as a band, the tunes are tight, but the sure know how to put on one hell of a performance. ENERGY!
A wicked fusion of dub, ska and electro sounds have the crowd watching do nothing but dance their feet off! I don’t think all of their shows are so welcomed, surely not, because this crowd was the best! I think it had a lot to being out in the middle of the countryside where people for throughout south Wales, had come to gather, to see what was an electric performance lead by front man Barry Ashworth. The audience ranged from high heeled teeny boppers, trustafarian, to mature 70 plus year olds and everything in between. Boy did they know how to party! And fuelled by the Dub Pistols, it was an explosive evening of good vibes.
Song after song of their unique blend had the crowd begging for more, and a triple encore was given.
The Dub Pistols know how to get a crowd going and the live show I saw was second to none. Every festival this summer needs the Dub Pistols on their line-up.
Pure, powerful, dub and ska energy! I can’t recommend them enough.
Sattamann